Poland is very nice place for tourist (PLL LOT), they are able to visit here plenty of interesting cities. one of it is Gdansk, This old town, situated at the seashore, has very rich history. It use to be a autonomic town named Danzig in the time of War World Two, earlier it belong to the germany and Poland. But the influences of the first country we could admire in the spectacular architecture of Gdansk. You need to visit this great city if you have opportunity, especially, that there are cheap airline tickets available.

First area you need to visit is the old town, situated in the north part of the city. This district was partly destroyed during the World War Two, but it still looks amazing. You could admire in there beautiful former city hall, raised in sixteenth century in Mannerism style, one of the most popular architecture movement in old Danzig. Also, if you know a little about history of town, you could see the old Post office. In this place, back in 1939, brave officers use to fight against Nazis to protect this building. This event was even wrote up in Gunter Grass novel named “The Tin Drum”. Beside, you could see in this area two nice mills, small and big, build back in Medieval times, it looks very amazing. Another interesting part of this district is Monument to the Fallen Shipyard Workers, nice example of new style in polish art, and great honor for the heroes. 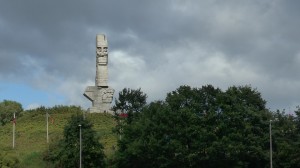 Another interesting, and the most representative area is main city. It is located right beside the old town, so you may just take a walk from there. This is a central point of every social events, a lot of citizens are meeting in here. You will find here another city hall, build in fifteenth century is a great example of Gothic and Renaissance styles mix, the true signature of this object is tower, 83 meters tall. Another spectacular example of Mannerism architecture in Gdansk is a building named Artus Court. It use to be a meeting places for all important merchants, cause Danzing was very important mercantile district. The whole building is renovated properly, and it is open for tourist to visit, so you better step inside, this interior design is amazing. And if you like to see another example of Netherlands Mannerism, you better go to the Great Arsenal, former armory build in 1605.

Gdansk is very nice place to have a sightseeing in. Great architecture, totally different then in another part of Poland, looks very amazing. Also, if you go there during the summer time, you could have some nice time at the beach.

« Monuments of Poznan
Useful ideas for budget holidays in Europe »