If you going to Canada, you can not miss one of the biggest and most famous cities of this country, Toronto. Tourists could find there not only a huge parks and green spaces, but also many cultural attractions. Toronto is situated in the south-eastern Canada, in the lowlands on Lake Ontario and more accurate in the southern part of the province of Ontario. It is a port on the Great Lakes and a center of scientific and culture. You can admire here, not only modern buildings in the form of for example, TV tower, but also a nineteenth-century buildings, such as University of Toronto, the parliament, numerous parks and gardens (including the Queen’s Park).
One of the main attractions of the city is paved transmission tower with a height of 553 meter- CN Tower, which is the second largest self supporting structure in the world. It is open till 10 p.m. in the winter and to 11 p.m. in the summer. During the visiting downtown of Toronto it is also worth to see the world’s first stadium with entirely folding dome – Rogers Centre. In this part of town the tourist looking for an entertainment will find something special. It is becouse of located there the Dundas Square, which hosts many concerts. It is impossible to miss it because of distinctive neons lights and fountains. Next to them it is an cinema complex with 30 screens. 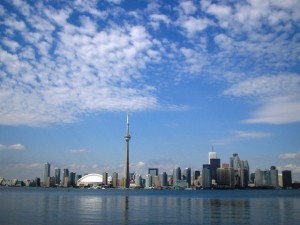 Lovers of fresh air and the nature must necessarily look to Queen’s Park, where you can also visit the neo-romanesque building of Ontario Parliament, surrounded by a park. You should also get in the car or train and go over Niagara Falls, located one and half hours far from Toronto. Fans of theater and opera will be delighted with Canadian Opera Company or The Theatre District. The youngest visitors will definitely have to visit the studio of Radio and Television, museums sugar and dolls, one of the world’s largest water parks – The Ontario Place, Black Creek Pioneer Village – historical village of reproducing life of the early settlers of the nineteenth century and Toronto Zoo. In ZOO there are the opportunity to see, among others, penguins, white lions, polar bears, American elk and cougars.

For shopping, it is best to go to the Chinatown Kensington Market. You can find all sorts of goods representing Arab, European, African and India. Local restaurant tempt with an exotic dishes and colorful facades of Victorian houses are full of clothing stores in vintage style. In the middle of town is also located complex called PATH, which is the largest mall in the world. Toronto is a multi-ethnic city in which every visitor will find something to interest him.

« Why it is worth to visit Sophia
Best of Beijing »